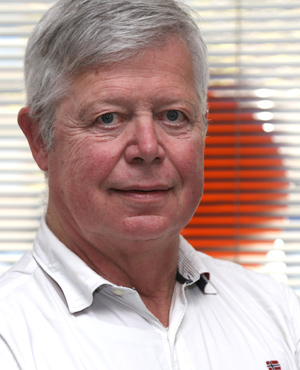 (+34) 971 220 666
(+34) 673 371 889
ulrich.krause@clinica-picasso.eu
Ulrich Christian Krause, M.D. is an experienced, originally general surgeon, but also a dedicated vascular surgeon with special focus on the treatment of venous disease.

After his academic career at the university hospital of Essen / Germany , in the eigthies and nineties of the past century – including habilitation in 1992 – he has been head of surgical departments at two community hospitals, located in Hessen and North Rhine Westfalia. Since the year 2014, he has excusively focussed on vascular medicine, with a clear stress on phlebology, mostly in an outpatient setting. Since 2014 onwards, he underwent training in the new method of minimal-invasive, endoluminal ablation of varices.

And adopted the technique for his patients – so that nowadays he has considerable experience in modern vascular vein treatment. Apart from invasive treatment, Dr. Ulrich Krause has gained significant experience in diagnostics : i.e. color-guided doppler-ultrasonography ( duplex ultrasound imaging), the modern gold-standard of venous diagnosis, for staging purposes, planning, control of therapies etc. The diagnostic range comprises not only all manifestations of varicose diesase, but also detection of thrombosis and exclusion, respectively. This is true for both superficial and deep vein thrombosis, including expert knowledge in therapeutic strategies ( s. chapter6 ).

At the Clinica Picasso, patients will find the combined conservative and surgical expertise for venous disorders in the hand of two experts, who are working closely together : Joachim von Rohr, Dematologist and Ulrich Krause, vascular surgeon. 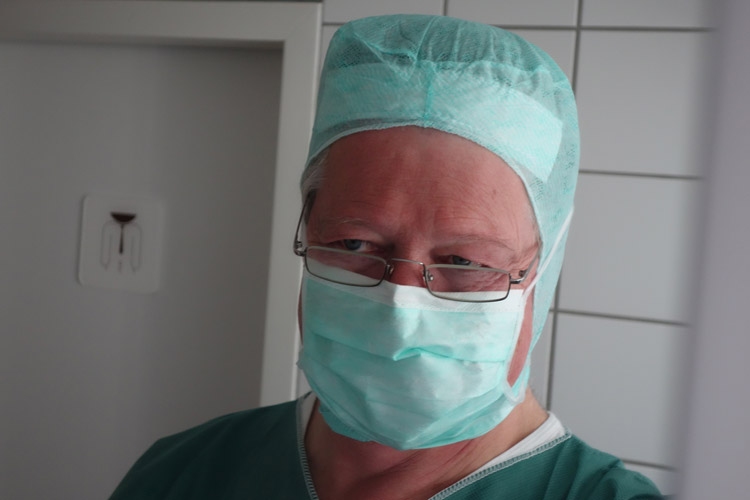 
Since several years, Dr.Krause has speciailized on venous disorders exclusively. In Germany, he is active also in scientific communities, with the consequen ce, that new developments will rapidly find their way into his clinical practise. The above mentioned setting at the Clinica Picasso – with the presence of both an expert dermatologist and an expert vascular surgeon - is unique on the balearic islands.

Varicosis – venous insuffiency – is a common illness, affecting 20-30 % of adults, females preferred. Many people with varicose veins have no symptoms but venous insuffiency may cause fatigue, heaviness, aching, throbbing, itching and cramps in the leg. Thus, it´s not ( not only) an aesthetic problem. Chronic untreated disease can lead to skin discoloration (dark pigmentation), inflammatory dermatitis and ulceration, as a final stage.

Furthermore, the risk of develloping superficial, or in rare cases, even : deep venous thrombosis is increased. Great saphenous vein insuffiency is the most common form in people prersenting with symptoms.

Instead of the classical, well evaluated and effective method of „ Stripping“ ( Babcock´s procedure) nowadays, in western countries, the endoluminal thermal ablation – via laser or radiofrequency – is the treatment of choice for the saphenous vein.

I.e.: leaving the vein behind in its anatomical site while occluding it by heat from the inside. This procedure will result in an internal scar, which the body will degrade spontaneously in a couple of weeks or months, respectively. The consequence for the patient: no visible scar, mini- mal pain, quick recovery, no immobilization. Scientific evaluation in various countries has shown long term efficacy comparable to Babcock´s procedure or even better. Our concept, at Clinica Picasso : once the diagnosis „varicous great (or small) saphenous vein“ is established - and proved by the two experts in phlebology – the patient will be offered endoluminal laser-induced ablation : on an outpatient basis, with local anesthesia , minimal pain and without serious side effects. Only few substantial medical contra-indications exist: multi-morbidity and advanced age for example.

For patients under continued anticoagulant therapy, we would prefer an in-hospital setting – which can be organized. Moderate physical activity is feasible and recommended the same day, return to normal life the next or at latest the second day after intervention. Stockings as an adjunct are neccessary approximately three days, only and antithrombo- tic medical treatment we advise for one week. 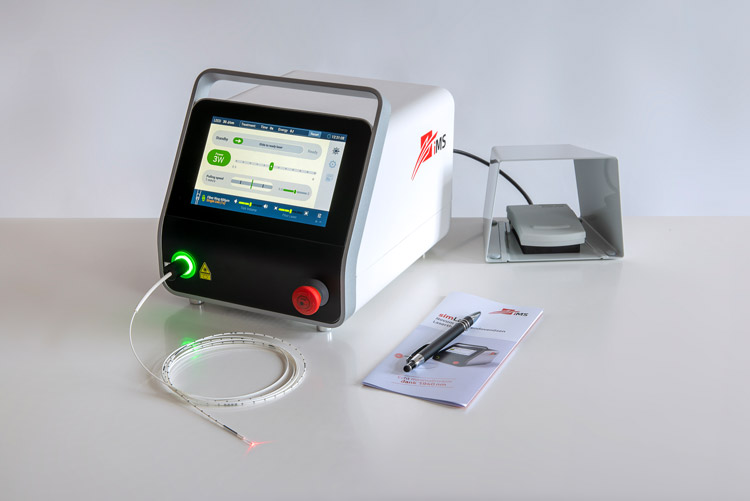 In any case of suspicion, duplex-ultrasound-imaging is an important and highly sensitive technique to either discover and prove the diagnosis or to exclude it. The ultrasound-scanner,we are using to examine varcose veins, includes the software also to explore the deep venous system with ist possible pathology.

Also, Dr. Ulrich Krause is familiar with up-to-date recommendations for treat- ment modalities. Last not least, he can offer special experience in the management of inherited thrombotic diseases ( Thrombophilia). 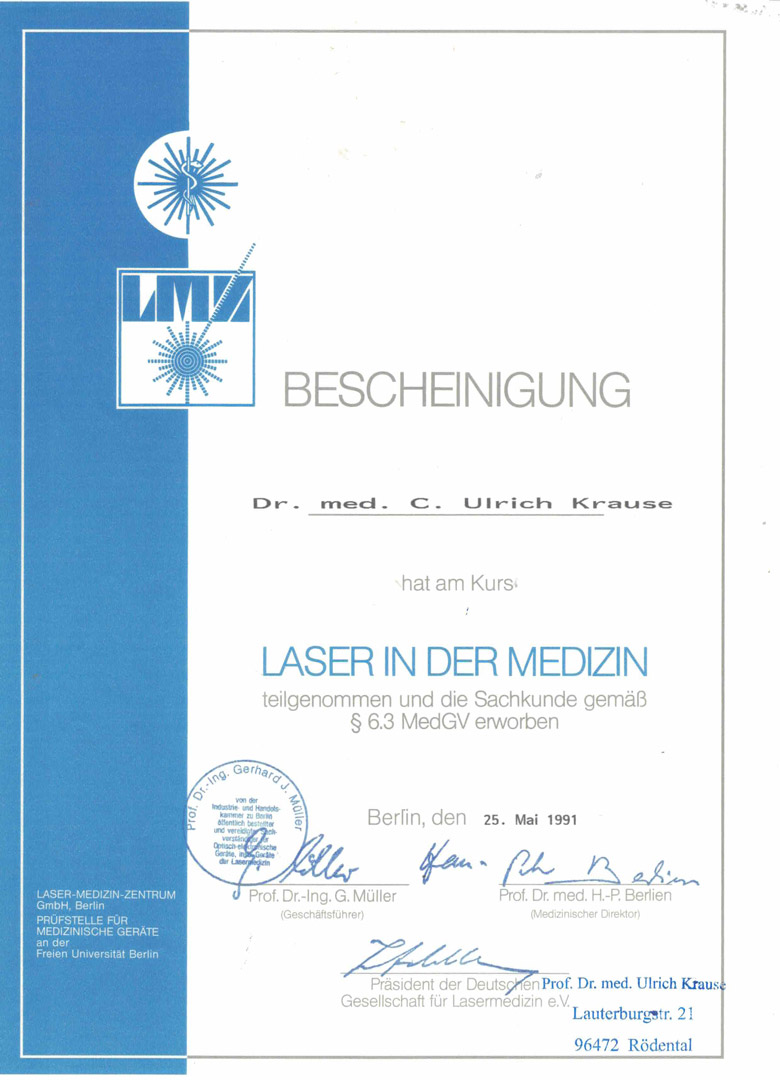 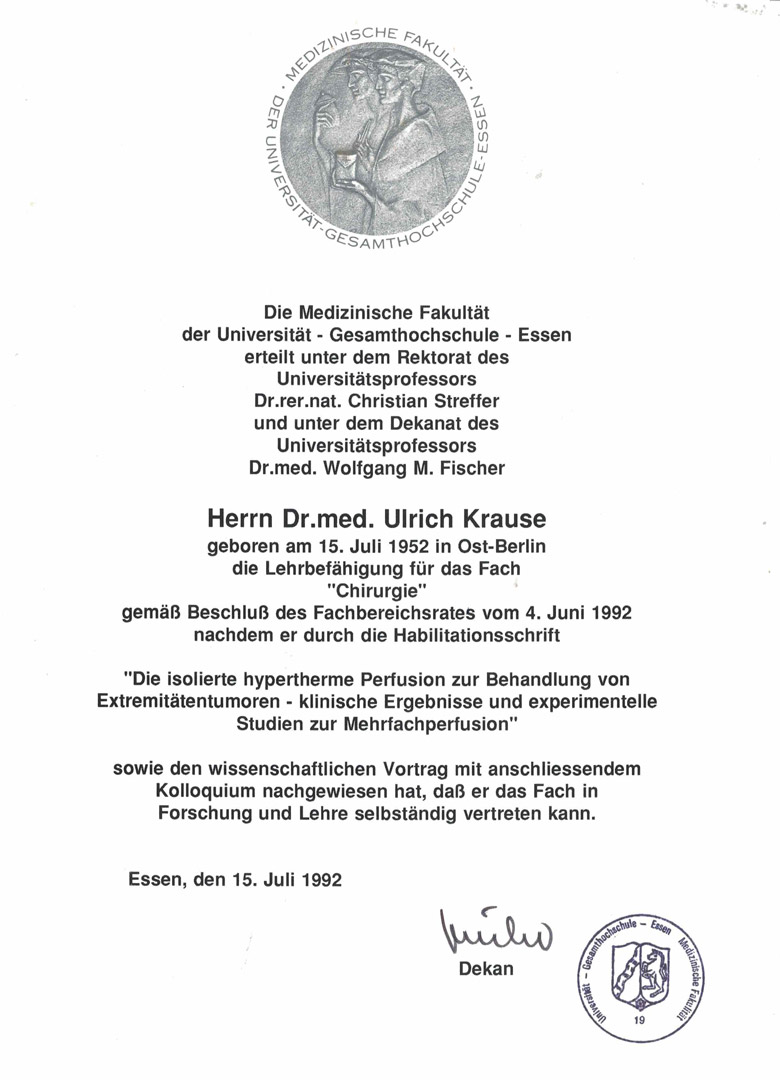 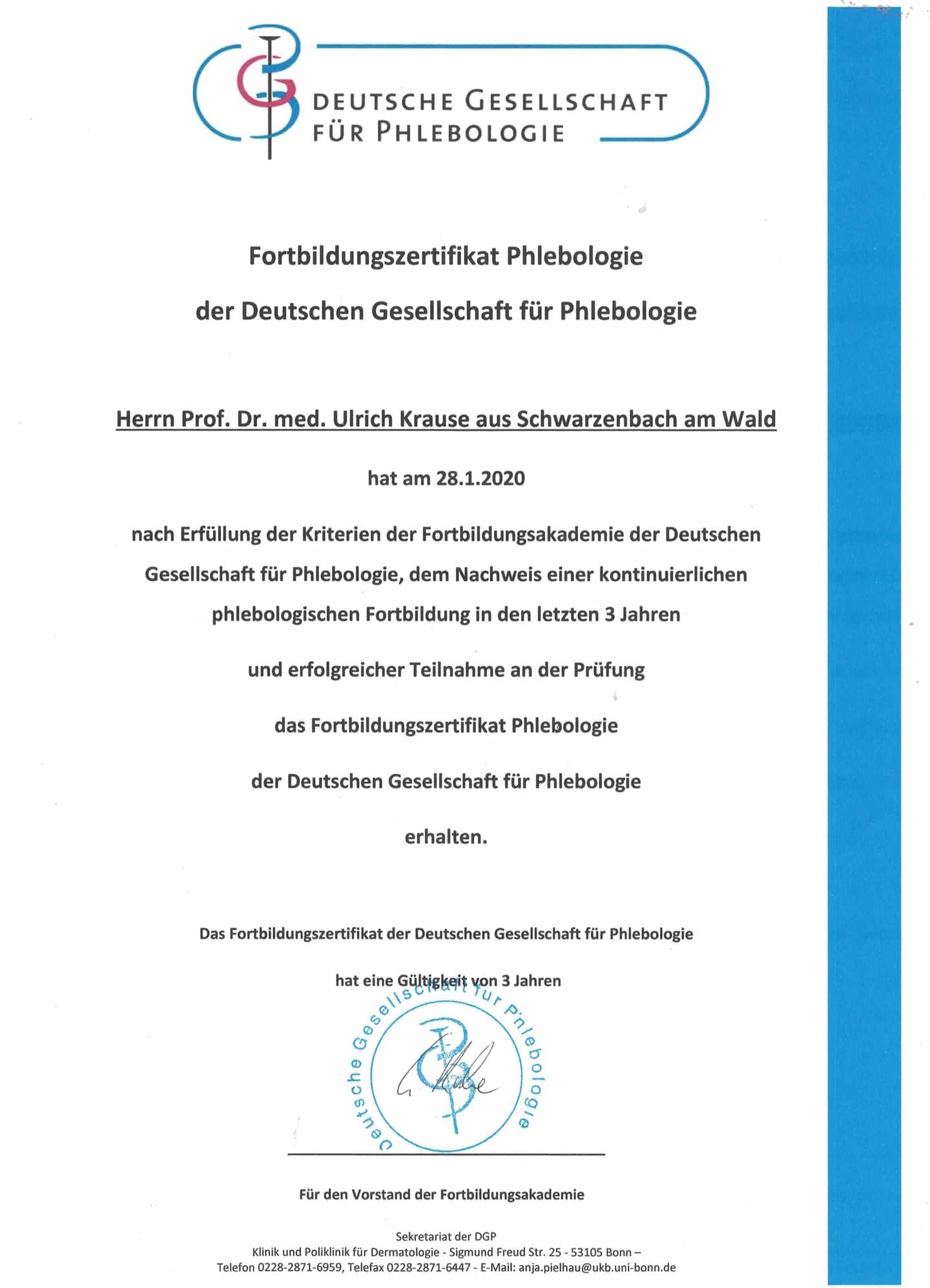